How is honey produced? 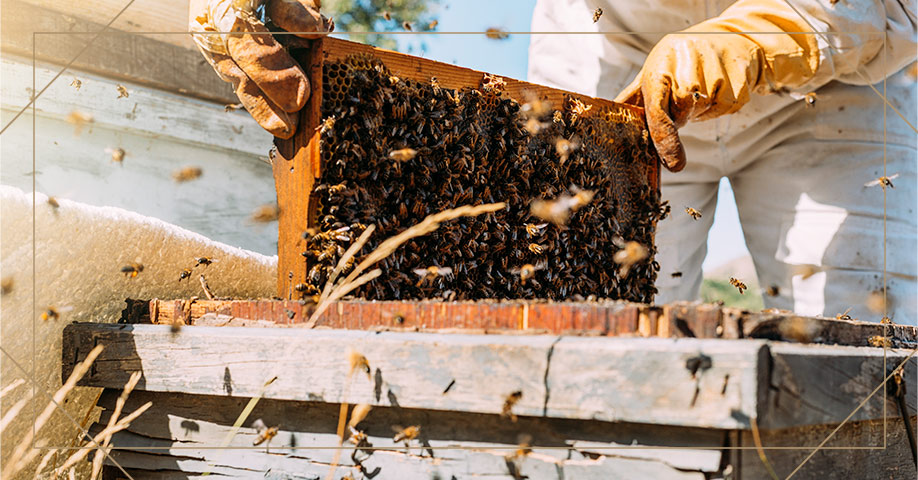 Honey is an integral part of Greek gastronomy, making Greek honey famous for both its taste and quality.

But have you ever wondered how honey is made?

What do bees do?

What is the role of beekeepers?

How is Greek honey collected, standardized and finally delivered to the consumer?

Muses Honey, a company with decades of experience in the field of honey production in Greece, will answer all your questions!

How does a beehive work?

Each hive has a clear hierarchy and consists of a queen, the drones and of course the workers, who have different roles.

The role of the queen in the hive

A queen bee is usually the mother or sister of all the bees in a colony, as her only purpose is to lay eggs.

When she is ready to mate, almost a week after birth, she flies to the area where the drones are gathered and mates with 12-15 of them, storing millions of sperm. This will allow her to lay selectively fertilized eggs for the rest of her life, daily, for two to five years.

The role of drones

The only purpose of the drones is to fertilize the queen. Later, the workers themselves will chase them out of the hive, where they will die.

The role of workers

Did you know that? Workers make up at least 98% of the population of a hive!

More specifically, some workers fly out of the hive in search of nectar and, as soon as they reach the hive, they deliver the nectar to another group of bees to "chew" it. Through chewing, and with the help of the enzyme invertase, domestic bees produce a substance that is essentially water with honey and diffuse it into the honeycombs. This will allow the water to evaporate, allowing the honey to become thicker – the pure Greek honey we all know!

Did you know that? To quickly evaporate the water and leave the thick honey behind, the workers constantly flap their wings to produce air!

Once this process is over and the moisture has evaporated, another group of workers is responsible for sealing the cells with wax, so that the product is protected!

How is honey produced in Greece?

In fact, bees produce honey to consume themselves - after all, it's their food!

In no case, however, do honey producers harm bees.

If the Greek honey is collected by professionals with due care and respect for the environment, the bees will compensate for the "theft" by producing more honey, thus continuing their life cycle without problems.

In order for honey producers to extract honey, they must first uncap the honeycomb, that is, to remove the wax that protected the honey until that time.

The honeycombs are then placed in a machine where, through centrifuge, the honey comes out of the cells. Here the process, ie the time and times each honeycomb will need to be rotated, has to do with the types of honey.

Finally, the honey needs to be filtered to remove any wax and pollen residues. It is placed in large containers with a tap at the bottom, as the lightest residues will remain on top.

The pure honey we get is our well-known award-winning Greek honey!

What are the types of honey in Greece?

In Greece, honey is divided into two main categories:

How is the quality of the honey that reaches the consumer ensured?

Many people are skeptical about the standardization of honey and whether the product that arrives in our home eventually retains its beneficial properties and nutritional value.

The team of Muses Honey, with its deep knowledge of the Greek nature but also through continuous training, remains faithful to the values that established it as one of the largest honey standardization companies in Greece.

It is a honey company that respects the environment, the bees, the beekeepers as well as the honey and its benefits, and produces only the best Greek honey, which reaches the consumers while keeping all the nutrients that make it stand out!